A downloadable game for Windows

UPDATE 10/08/2016: One (1) teaser screenshot for the the next build, showcasing ship welding. I never said your ship would look pretty.

You are the AI adjutant of the 'General Purpose Machine' MUTEKI. After a failed defense of the planet Earth, your ship is catapulted into an unfamiliar galaxy teeming with scrappers and triads who'd like a transistor-level view of your head. Use your GPM to assimilate parts of enemy ships and/or innocent bystanders, build a big chugging unbalanced war machine, plow through heavily-armed police fleets and find a way back home.

...or at least, that's what you'd do if the game were anywhere near done.

This physics sandbox demo showcases the advanced 'free cutting' damage system, which lets you carve up enemies any way you like-- they'll break apart dynamically, and orphaned equipment modules will cease to function. In the next demo, you'll also be able to attach them any way you like.

With free scrap placement and the already-implemented automatic thrust balancer, MUTEKI aims for a more spontaneous and visceral experience than similar offerings. Heavily inspired by Battleships Forever, its damage system could be considered the logical conclusion of that game.

Ships kitbashed from sprites by

...and anybody else I may have missed from the Wyrdysm Games forums. Used without permission. If you want me to take this down, just shoot.

From Freesound.org, sounds by:

Hey I know I'm reaching out on an old post, but I'm curious to know if this project is abandoned.  And if so, would you be willing to sell what you've made so far?

Trying to make a prototype of an idea I had and this project has a lot of the pieces made.

If so feel free to add an @gmail.com to my username to reach out.

Please add more to this game, I really like the mechanics and the style. I would love to see space combat and resource mining :)

Also, if you could add options to change the controls that would be great

Thanks for your interest. A big update is in active development; it'll be the first 'game-like' build instead of being a tech demo. As such, you should expect to see a survival-style game mode with rudimentary menus for control mapping and graphics.

As of last week, the functionality for stealing stuff from NPC ships is more-or-less ready. Currently, I'm developing a formation-based NPC AI that will form the backbone of space combat. Instead of coming at the player in masses or waves, they'll exercise caution and force coordination commensurate with a threat like the monstrous General Purpose Machine.

Also in the works is a "toy" astrophysics implementation that seamlessly integrates realistic phenomena like moving planets and Hohmann Transfer-esque maneuvers with 'arcade'-style flight physics. Don't expect it to see it in the next build, but it's a thing that's happening eventually.

As for resource mining, there are plans to add a heavy 'kernel' to asteroids that make them impractical to use as armor, but which yield raw materials if destroyed. It's certainly not intended to be a main method of progression; "ratting" and wanton piracy are more the game's style.

Whatever the case, there'll be a new demo on September 8th or 9th with everything developed up to that point. See you then!

That is great, thanks a lot

has this been abandoned? I ask because the last post on this page was 106 days ago

Technically no, but I'm busy with college for the moment and real progress won't occur until next summer. Here's the latest webm:

There's certainly more to it now, but it's never been ready for release as anything more than a tech demo. I want it to reach a stage where it's actually enjoyable before I put up a new demo.

This really looks unique and I can't wait to play another demo, keep up the good work <3 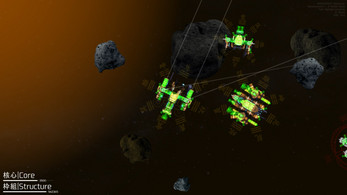 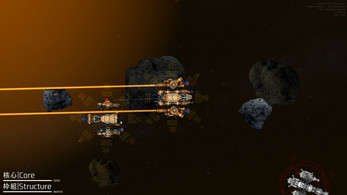